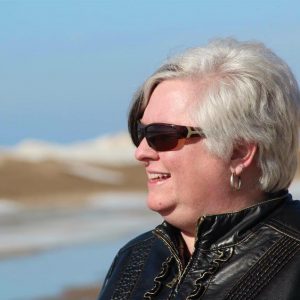 I’m Trixie G. Smith, Director of The Writing Center and the Red Cedar Writing Project at Michigan State University, as well as faculty in Writing, Rhetoric & American Cultures and the Center for Gender in Global Contexts. Since joining the faculty at MSU in August 2007, I have taught WRA/ENG 395 Writing Center Theory and Practice and WS 304 Intro to Queer Studies (core course for the Queer Studies minor and Women’s Studies elective), and graduate seminars in Writing Center Theory and Administration, Queer Rhetorics, Rhetorics of Embodiment, Composition Studies, Methods of Teaching Writing, and American Cultural Rhetorics.

After earning a BA in English and Elementary Education from Mobile College, I spent several years teaching middle and high school students in Georgia and southern Alabama. I then headed to The University of South Carolina where I earned an MA in English (Renaissance Drama), an MLIS in Library and Information Science, and a PhD in Composition and Rhetoric, as well as a Graduate Certificate in Women’s and Gender Studies. My teaching and research are infused with issues of gender and activism even as they revolve around writing center theory and practice, writing across the curriculum, writing pedagogy, and teacher training. Likewise these areas often intersect with my interests in pop culture, service learning, and the idea that we’re just humans learning with/from other humans (you know, with bodies, feelings, lives outside the academy). I love it when my interests are able to intersect in faculty workshops, conference sessions, and professional development in the writing center.

I have served on the International Writing Center Board as Representative at Large, chairing the Grants and Works in Progress committees (2012-16) and facilitating/co-hosting the Summer Institute 2014-16.  I am also on the East Central Writing Center Association  Board, presently serving as Treasurer. Previously, while the director of the writing center at Middle Tennessee State University, I served on the SCWCA board, and co-founded the Tennessee Writing Center Collaborative.

Recent publications include Bridges to Writing (Fountainhead Press, 2014, with Allison Smith), The Pop Culture Zone: Writing Critically About Popular Culture, 2nd ed (Cengage, 2015, with Allison Smith), and articles in Working with Faculty Writers (Eds. Geller and Eodice, Utah State UP, 2013), WAC Partnerships Among Secondary and Post-Secondary Institutions (WAC Clearinghouse Perspectives on Writing book series, forthcoming), and Composing Feminist Interventions (Eds. Blair and Nickoson, forthcoming). I also co-edited a special issue of Across the Disciplines focused on graduate writing (Summer 2015) and special edition of The Writing Instructor, Queer and Now (Summer 2015). Other publications include Movies, Music, and More: Pop Culture in the English Studies Classroom (with Joseph Darowski, Fountainhead Press, 2011), Teaching in the Pop Culture Zone: Using Popular Culture in the Writing Classroom (with Allison Smith and Rebecca Bobbitt, Cengage/Wadsworth, 2009), a chapter in (E)merging Identities: Graduate Students in the Writing Center, several articles in Southern Discourse, and COMPbiblio: Leaders and Influences in Composition Theory and Practice (with Allison Smith and Karen Wright, Fountainhead Press, 2007) — a reference book focusing on the career arcs of leaders in composition studies. I have also served as one of the series editors for the Fountainhead Press X Series for Professional Development since its inception in 2007.